NIBS arranged the 3rd of a 4 Bonsai Schools on Saturday 8th Oct.

Peter Snart of  Willowbog Nursery  gave a series of talks on a number on number of subjects including Topical issues, Winter Protection and Dead Wood on Trees.

This part of the day involved a pooling of personal experiences and observations following the last two very severe winters and the poor summer in 2011.Members reported Larches putting on abnormal growth in early autumn when they should be thinking of winter. One member reported some trees flowering for the second time in the season while others commented on the fact that autumn colours had appeared early on some maples.  Many hawthorns had dropped their leaves completely while others were still in pretty full leaf.

This proved to be a very interesting topic. Our past winters have been unusually severe and the coming winter is being forecast by some to be even worse.We have been used to mild winters in the past years and it was not uncommon to give the lawn a winter cut in December.

The bottom line is that we need to give more thought to Winter protection to prevent long periods of frozen roots with the consequent damage that this involves. This may involve insulating the pots, burying them in the ground or the use of greenhouses, poly tunnels or even the garages to store trees in.

Peter had prepared a hand out which gives some valuable advice on this matter and with his permission I have reproduced it the Literature section for any who are interested.

See Winter Protection for Peters hand out on this subject.

While in no way trying to style the tree Peter used a larch Larch to demonstrate the techniques used. He first of all used a felt tip pen to mark out the area of trunk on the tree which he thought would best suit it. He indicated as he did this that he was trying to mark where the tree told him to go by its contours and marks on the bark. 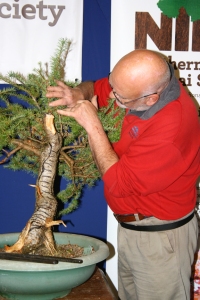 He then demonstrated the various technigues used to expose the shari and to maximise the natural grain of the exposed timber.

The trunk was cut with large cutters. This was repeated all the way down the trunk.

In order to leave a more natural effect, part of the wood was lifted using the large trunk spltters and then pulled down the trunk with smaller pliars using a rolling action. This wrapped the timber around the pliars as it was torn away from the trunk. This was repeated until a satisfactory result had been achieved. Following  a little after work to reduce raw edges and loose tree fibres the tree would be left to age before applying preservative solutions.

Peter then directed us to Deadwood on broadleafed trees and selected one of the member’ s trees, Roy’s, to work on. This hawthorn had an ugly branch stump which had been left on  following a serious bit of pruning earlier in it’s life.

The objective was to carve a hole in the stump with a power tool and carefully shape the top edge to give the impression that a branch had fallen off during a violent storm or had been damaged by lightening. The resultant wound would age and perhaps callous over both in nature and in the bonsai.

Peter carved down vertically and then entered the trunk from below the stump to make a connecting hole in the tree which with further ageing techniques would blend with the overall image of the tree.

The next few images show the work in progress. 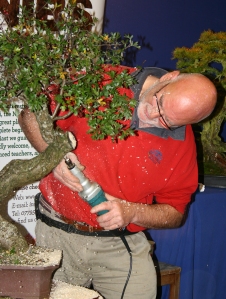 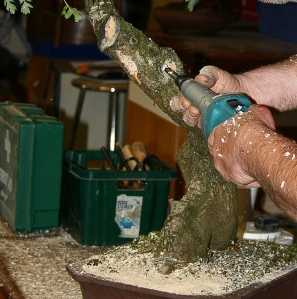 The purpose of this demo was not to style the tree but simply to give a demonstration of how and when to use some of the techniques possible to produce attractive deadwood.

This image of a scots Pine provides an excellent example  of deadwood incorporated into the design.

This site uses Akismet to reduce spam. Learn how your comment data is processed.